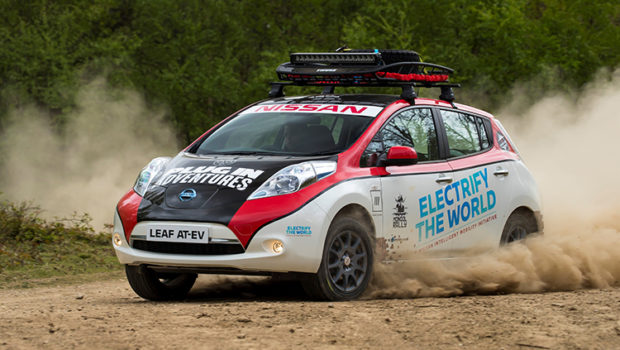 I have to admit when the uninformed person voices misconceptions about the capabilities of the Nissan LEAF, I sometimes have to chuckle lightly. The EV is so much more than many grok. I am not surprised by the Ramseys’ success. Still, I admire their journey. Total EV further quotes Ramsey,

Three years after the original concept was shown in Tokyo, Nissan has unveiled a working prototype of its wedge-shaped Bladeglider concept in Brazil. The BladeGlider is an electric-powered three-seater which, though Nissan doesn’t admit it, is an almost direct result of the company’s collaboration on the DeltaWing race car in 2013. The legal battles that followed the first unveiling of the BladeGlider and the company’s plans to produce it appeared to put the idea on hold. Until now.

ll the energy used is renewable and they propose that the space occupied by gas stations could finally be allotted to greenery.While the entire idea is quite innovative and fun to watch, it is confusing as to how removing gas stations could lead to tree plantations. They claim as if these stations are occupying majority of the world while in reality it is occupied by buildings and lots of other places, definitely not fuel points.However, Nissan’s Leaf electric car concept is all about using and sharing distribution friendly energy. Wireless charging is an idea to welcome as it allows people to just go to a restaurant or any other public spot while the car continues to charge itself up. Besides, the video even depicts the scenario where one just has to get off the car as it is capable of automatically parking itself. Once fully charged, autonomous driving technology moves it away from the space allowing another car to take up the spot.

You might remember Nissan’s seriously cool Juke Nismo RSnow that swapped its wheels for snow-blazing tracks. Cool, right? Now, Canada gets its own taste of this idea with the Nissan Rogue Warrior at the 2016 Montreal International Auto Show. With a combination of four tracks and all-wheel drive, this custom crossover should have no problem driving through any snowpocalypse.A company called Motorsports in Action from Quebec fit the Rogue with a Dominator track system with components that are 30 inches high and 48 inches long. To make everything work, the company also adjusted the suspension, widened the fenders, and gave the crossover 23 inches of ground clearance. The powertrain remains stock, and Nissan claims the Rogue Warrior can reach 62 miles per hour and climb a 45-degree grade.

Source: Nissan shows off the Rogue Warrior, and it’s awesome

In a new video, Renault offers an insight into the in-car technology and human-machine interfaces that  will make life easier for drivers of autonomous vehicles. The video follows the announcement earlier this  month that the Renault-Nissan Alliance will be launching more than 10 autonomous drive vehicles by  2020.  As well as helping to reduce both driver error and road accidents, autonomous drive technology will free up time for motorists. Working closely with its Alliance partner Nissan, the Renault team has developed a new suite of connectivity applications that let drivers stay connected socially and professionally – while also improving their in-car comfort. Solutions will include remote control of the car’s temperature and automatic adjustment of the seat position depending on the driver. Watch the video for a glimpse into the future of autonomous driving:

The driverless car concept is soon to become a mass-market reality. Nissan just debuted the IDS (Intelligent Driving System) Concept ahead of its official launch at this year’s Tokyo Motor Show, joining the list of domestic and European brands already exploring self-driving technology.

Nissan is decking out a Nissan Leaf electric vehicle with a bunch of autonomous-drive sensors. The Japanese automaker has dubbed the tech Piloted Drive 1.0 and recently showed it off on test vehicles at Nissan’s Advanced Technology Center near Tokyo, Automotive News says. The vehicle will feature almost 400 sensors that offer 360-degree measurement data between the driver’s car and others. A version of it will be available in Japan by the end of next year.Next year will bring fresh capabilities to the EV that Nissan has been using to test self-driving technology, including the abilities for the car to pass other vehicles, change lanes, and merge onto and off of highways. The program is called Nissan Intelligent Driving and it is currently in use in three Nissan Leafs.Nissan has long proclaimed that it would have a self-driving vehicle on the road by 2020. More recently, though, Nissan CEO Carlos Ghosn has said Nissan’s efforts to meet the 2020 deadline may be hamstrung by government regulations. Nissan has worked with institutions such as MIT, Stanford, Oxford and others to test self-driving capabilities.Still, the subject of tech advancing faster than regulations has gained relevance as automakers like Tesla Motors have upped their cars’ self-driving abilities. Released earlier this month under Tesla’s software 7.0 suite, Tesla has added self-driving capabilities related to parking, side-collision warning, lane-changing and automatic emergency steering. Tesla Motors chief Elon Musk has said a fully-autonomous vehicle may be on the road by 2018, beating Ghosn’s goal by a couple of years.

Source: How the Leaf is helping Nissan get to autonomous cars