Loo averaged 11.1 seconds per lap, while the AI drones averaged 13.9 seconds. But it wasn’t simply a question of speed. The JPL team points out that its drones flew more consistently overall and weren’t troubled by fatigue, unlike Loo.

Kalashnikov Concern, the largest arms manufacturer in Russia, recently released a YouTube video of a man flying a hoverbike on September 25, 2017. A pilot flew the hoverbike inside a warehouse among a crowd of bystanders. The video only showed a preview of the Russian innovation, but the 16 motor manned aerial vehicle (MAV) is still a working prototype. 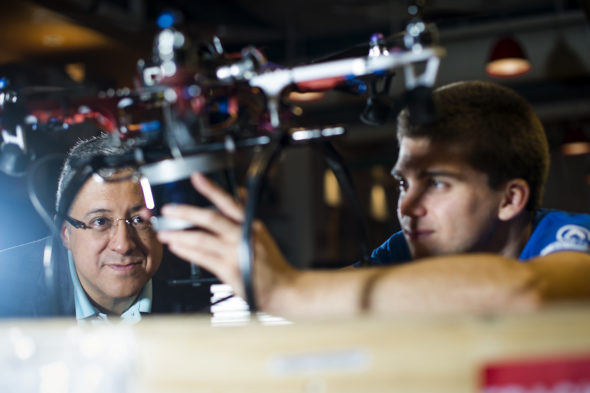 Cities and towns all across the globe are reeling from a spate of hurricanes, earthquakes, and typhoons. Human safety is the most immediate concern. But damage assessment is important too.Quickly following a natural disaster, it’s critical to evaluate the health and strength of a city’s infrastructure. Failure to do so can have catastrophic consequences. For example, it wasn’t the earthquake in Fukushima, Japan, that inflicted most of the devastating destruction. And it wasn’t the tsunami that followed.“The greatest damage occurred when reactors blew up because of the hydrogen explosions,” said Taskin Padir, associate professor of electrical and computer engineering at Northeastern.Taskin Padir and his student Nicolas Binford work on a hexi-copter drone. Padir’s lab is developing aerial robots for damage detection after disasters. Photo by Adam Glanzman/Northeastern UniversityPadir is working with faculty colleagues Jerome Hajjar, professor and chair of civil and environmental engineering, and Peter Boynton, professor of practice of social science and humanities, to build automated aerial robots to detect infrastructure damage after extreme events. The goal of the project, which is being funded by a seed grant from Northeastern’s Global Resilience Institute, is to “minimize additional disasters caused by disasters,” Padir said, citing the nuclear accident in Fukushima and the explosions from a chemical plant in Houston after Hurricane Harvey as prime examples of cases where his aerial robot could be helpful.These aerial robots aren’t like the drones providing visual footage for news outlets, Padir said. Those images are helpful in conveying a general sense of the wreckage, but detecting infrastructure damage is a different story. Cracks, fractures, and other structural vulnerabilities are often inconspicuous and can appear innocent to the untrained eye.“A building may look healthy, but there are certain misalignments and certain cracks that might be problematic later on,” Padir said.

Logistics company Matternet has announced a permanent autonomous drone network in Switzerland that will now see lab samples like blood tests and other diagnostics flown between hospital facilities, clinics, and labs. The first delivery network will be operational from next month, with several more to be introduced in the next year. Matternet says medical items can be delivered to hospitals within 30 minutes.Matternet, based in Menlo Park, California, was granted authorization to operate its drones over densely populated areas in Switzerland in March and says that approval was a world first. Today, the company unveiled a Matternet Station; a kind of white, futuristic looking postbox with a footprint measuring about two square meters, that can be installed on rooftops or on the ground to send and receive packages by drone.

Source: The first autonomous drone delivery network will fly above Switzerland starting next month – The Verge

Packages ready to be fixed to a drone are placed into a drawer on the Matternet Station. A camera captures a QR code on the package which links it with a destination. Meanwhile, a storage bay of five batteries is made available to the drone. Everything happens smoothly and with minimal human interaction by design

Source: Matternet’s autonomous delivery drones can now refuel and reload by themselves | TechCrunch

The idea of reducing both civilian and military casualties through the deployment of weaponized drones is, on one hand, an appealing prospect, but it’s also undeniable that the idea of a fleet of drones with machine guns flying through the air is absolutely horrifying. 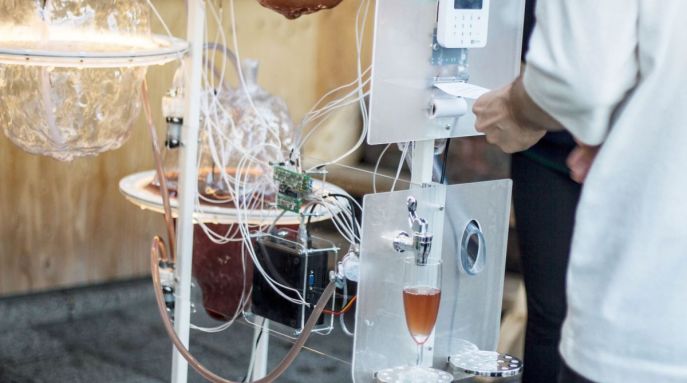 Marie Caye and Arvid Jense created SAM, an autonomous soda making robot, to help them prove that machines are alive and deserve rights too.